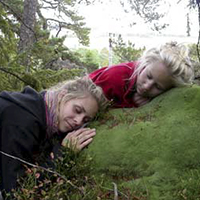 Dals Rostock lies in the middle of Dalsland, in Melleruds commune, approximately 7 kilometres West of the town Mellerud. The district has roughly 800 inhabitants and clings to the steep side of Kroppefjäll’s slope, exactly where the forest and the farmland meet. From many places one has magnificent views of the surrounding countryside.

Dals Rostock is an old health resort with a very exceptional and interesting history.
The three main activities have all been about health and care. They are : Rostock’s Spa, Kroppefjäll’s sanatorium and large plantations with medicinal plants for pharmacists.

Later when the spelling became Rostock they had to add the word Dals in front of Rostock in order to avoid confusion with the German town of Rostock. Dalsland had earlier been called Dal.

Wilderness around the corner

Wilderness around the corner

In Dals Rostock you are close to the vast unspoilt national park of Kroppefjäll. The word “fjäll” means mountain, it is not a mountain as such but a high, densely forested plateau.

Kroppefjäll is roughly 10km wide and 27km long and extends in a North to South direction. It is roughly 200m above sea level. The nature is varied with interesting minerals, many small lakes and tarns and rich in plant and animal life.